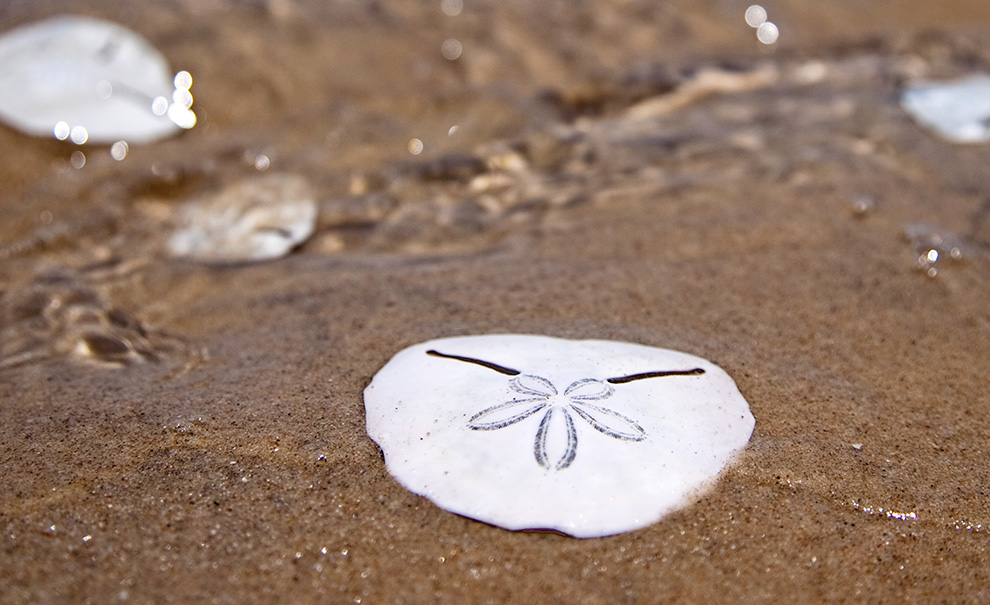 While staying in the Plett, Knysna or Noetzie and surounds there is a small natural ‘treasure’ that awaits the wonders of sharp-eyed, intrepid beach detectives; the ever elusive Pansy Shell.

Beach walkers and nature lovers of the Garden Route delight in finding this rare beauty intact and washed up by the Indian Ocean currents. The Pansy Shell, (also known as a Sand Dollar) makes its appearance on the Keurbooms Beach, Plettenberg Beach and most beaches along the Garden Route and Knysna coastline – the beautiful holiday destination of Plettenberg Bay even has the Pansy Shell as the town emblem! Pansy Sells are actually a part of the Urchin family and are technically Lamp Urchins. They are sometimes said to represent coins lost by mermaids or the people of Atlantis while Christian missionaries found symbolism in the fivefold radial pattern and dove-shaped internal structures. If you break open a Pansy Shell, (although having found this rare shell intact it would be sacrilege to do so), 5 small white ‘dove-shaped’ shell pieces reveal themselves. The popular folklore poem states “here you will release, the five white doves awaiting to spread goodwill and peace.” These charming legends add to the immense excitement of finding a Pansy Shell on the beaches of Plett and its surrounds.

The Pansy Shell is prohibited from being sold commercially in Plettenberg Bay as it was on the verge of near extinction. Luckily populations are growing again and the washed up shells are making their spectacular appearance again on the shores. Keeping this in mind, if you find a live one, please it on the shore.

They key in finding these amazingly rare shells, is frequent beach-combing just after high tide has receded. Of course, this means that the closer you live  to the beach the better, so that you can “max” out your time on the beaches!

If you are lucky enough to stay in a beach front property, then set your alarm each morning and make sure you are on the beach combing for shells just after the high tide has receded. There are many beautiful properties available to rent along the Plettenberg Bay areas as well as Knysna and Noetzie.

At the breathtaking Craighross Caslte in Noetzie you’re literally on the shore watching the waves bring their treasures to you! Lindsay Castle in Noetzie too is right on the beach.

It’s indeed possible to find a Pansy shell keepsake during your holidays to Plett, knysna and and Noetzie, so make sure you keep your eyes peeled and happy hunting to all!